Labours of Love… creating a unique collection of lifeboats

Martin Woodward MBE – professional deep-sea and shipwreck diver, Lifeboat Coxswain and crew member, author, charity fundraiser … the list goes on. Here he charts the progress of his indefatigable restoration work on historic lifeboats and tells the story of his Shipwreck Centre and Maritime Museum (housed at Arreton Barns, just 9 miles from Bembridge Harbour).
The words passion and commitment, often overused, don’t go far enough…Charity work can be a real struggle at times, and in these competitive days fundraising is never easy. The old adage ‘Restoration projects…the road to hell paved with good intent’ comes to mind! 2016 saw a few changes for the Isle of Wight Historic Lifeboat Trust, particularly with the acquisition of the RNLB Jesse Lumb, the largest boat so far.
The Trust’s collection of former Isle of Wight lifeboats now numbers four, consisting of Queen Victoria (1887), Selina (1905), Langham (1922), and Jesse Lumb (1939). The Selina was the ex-Ryde lifeboat of 1905, which was tragically capsized in a storm in 1907 with the loss of two of her crew.
The other three lifeboats all served at Bembridge. We should never forget the incredible bravery of the crews in those days of the early lifeboats.
Jesse Lumb is an important acquisition to the Trust, as she was the longest serving lifeboat at Bembridge, serving for 31 years between 1939 and 1970. A 46ft Watson Class lifeboat, she was replaced in 1970 by the Solent Class lifeboat Jack Shayler and the Lees. –Jesse Lumb went on to serve in the RNLI reserve fleet before being sold in the 1980s.
She was then acquired by a group of enthusiasts who restored her back to her original 1939 condition and put her on display in the Imperial War Museum at Duxford. Despite the Duxford Imperial War Museum mainly exhibiting aircraft, the Jesse Lumb was considered an important addition, as she rescued numerous airmen from downed aircraft during WW2.
Jesse was exhibited at the IWM from 1991 to 2016, but then major changes in the exhibition necessitated her being moved out to make way for new displays.
Martin Woodward, (Chairman of the IWHLT), had been keeping in touch with the Museum over the years, as he predicted Jesse would become available one day, and he and the other IWHLT trustees were keen to return her to her previous home on the island.
This, however, created yet another problem for the IWHLT, as despite numerous appeals for a new home under cover for Queen Victoria (1887) and the newly acquired Jesse Lumb, nothing had been forthcoming. Undeterred, the IWHLT went ahead with the acquisition of Jesse Lumb and hoped for the best.
After another appeal in the IW County Press, (who are always incredibly supportive), a solution was eventually found. The previous Classic Boat Museum at East Cowes on the island were relocating premises to the old Souters’ Yard at West Cowes and hoped to create a larger exhibition incorporating other local heritage.
Now trading as the Classic Boat Centre Trust, the Chairman Mark McNeill and other trustees thankfully saw the potential of giving a home to the IWHLT lifeboats to increase the size and diversity of the CBCT exhibition.
It was then agreed to merge the two charities to increase the capability for future expansion. Fittingly, the old Souters’ Yard was previously the former Samuel White’s Yard, where both Langham and Jesse Lumb were originally built.
It was a nostalgic moment when the Jesse Lumb returned home to the yard in July 2016, in particular for Martin, who joined the crew in his teens when Jesse Lumb was stationed at Bembridge.
He has just written, (and the RNLI have just published), a new book on the history of Bembridge Lifeboat Station, which is available at the RNLI shop and other local outlets, with 100% of all proceeds to the RNLI.

The other connection between CBCT and IWHLT is that when Martin originally acquired the Queen Victoria in the late 1980s, it was in such poor condition that none of the boatyards were prepared to take on the restoration work, despite some initial funds being raised. Fortunately, a few years later the Classic Boat Museum and founder Maurice Wilmot were establishing a museum at Newport and were keen to show their restoration skills, resulting in them agreeing to take on the task in 1997.
Queen Victoria was completely restored by 1998 and went on to attend numerous re-enactments and events nationwide. 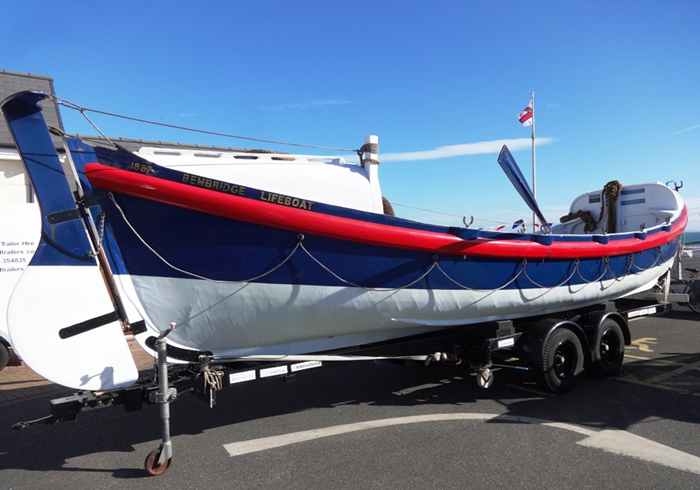