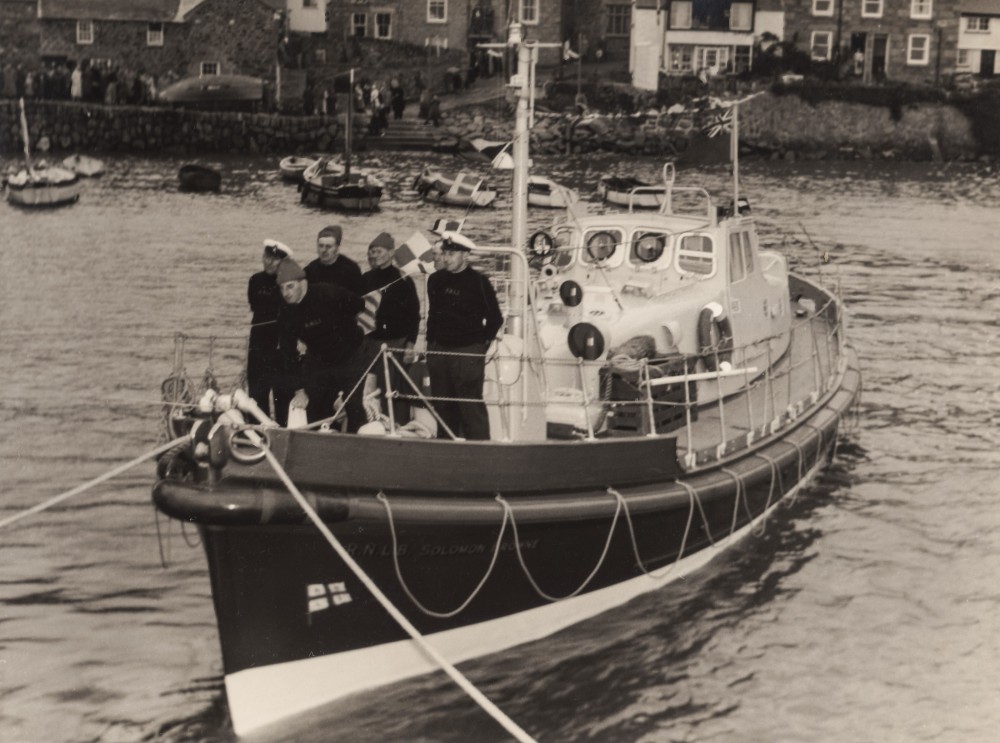 The naming ceremony and service of dedication of the ‘Solomon Browne’ took place at Mousehole Harbour on Saturday, 17 September, 1960 at 3pm.
In cold, blustery weather, several hundred people crowded Mousehole’s Old Quay to watch Lady Tedder name the new £35,000 Penlee Lifeboat. The crowd held their breath when the champagne bottle did not break for the first time.

Coxswain Jack Worth saved the day – he had a small hammer in his hand and smartly smashed the bottle “in true sailor’s fashion”
The Dean of Truro (The Very Rev.H.M.Lloyd, DSO, OBE) dedicated the lifeboat, (top photo) assisted by the Vicar of Paul (The Rev. J.H. Tyrrell) and by the minister of St Clements Methodist Church (The Rev. J.P. Horner, B.D.) 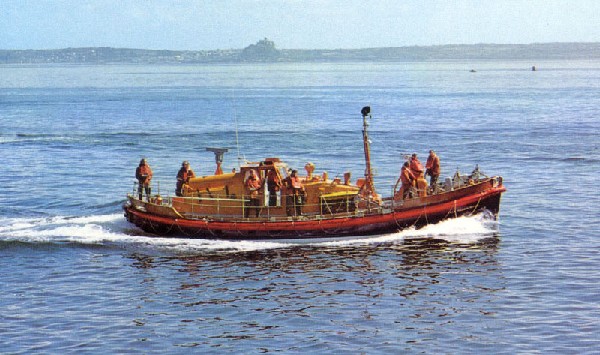 The Solomon Browne lifeboat, partly funded by a HUDDERSFIELD woman, sailed into history in Hurricane Force 12 gales 40 years ago. The boat and eight man crew were lost in the Penlee Tragedy.

Miss Lydia Mary Dyer Browne of Launceston, Cornwall, Miss Sarah Wilhelmina Davies of Timperley, and Miss Blanche Waterhouse of HUDDERSFIELD, funded the boat which served at Penlee, Cornwall, from 1960 to 1981.

It had been launched 238 times and saved 91 lives.

The wooden 47 foot lifeboat was launched in hurricane force winds and waves 60 feet high to go to the aid of the stricken Union Star.

Often considered the most beautiful fishing village in the county, with its windy narrow streets and ancient granite cottages clustered around its harbour, Mousehole is a close-knit community steeped in seafaring tales. However, not all such tales have a happy ending, and the one which took place on the 19th of December 1981 is a case in point, for it was on this day that the Penlee Lifeboat, Solomon Browne, set out, with eight of Mousehole’s men, to aid a stricken vessel, never to return. Although many years have now passed, the tragedy still haunts the village, especially around the anniversary of that ill-fated day.

A cargo-carrying coaster, the Union Star, was on her maiden voyage between Holland and Ireland that stormy December day. The eight people on board were Henry Moreton, her captain, a further 4 crew members, and Moreton’s wife along with her two teenage daughters. A few miles off Land’s End, near the Wolf Rock lighthouse, the ship’s engine cut out and Moreton put out the news on the radio. A tug boat, the Noord Holland, offered help and, indeed, started out towards the stricken boat, but the captain refused the assistance owing to the financial implications of being salvaged.

As the storm worsened, and still unable to start the engines, Moreton put out a distress call to the Falmouth coastguard as his ship was washed increasingly closer to the jagged rocks off the southern Cornish coast. In gusts of nearly 100 miles an hour and average wind of around 80, a Sea King helicopter was dispatched from RNAS Culdrose but, such was the ferocious state of the sea, it was unable to lift a single soul to safety. By this point the tug was also in the vicinity, but Moreton held out and, in any case, the Union Star was now in such a position near the coast, in waves upwards of 50 feet, that the tug’s skipper felt it impossible to get close enough to establish a link and was unwilling to risk the lives of his 11 crew in the attempt.

At this point, the Solomon Browne, the wooden 47’ lifeboat stationed at Penlee Point near Mousehole, raced down its slipway into the raging seas of Mount’s Bay. Aboard were eight men, all volunteers from the village of Mousehole, under the command of coxswain Trevelyan Richards. He had chosen his crew carefully, taking the most able seamen and, crucially, only one member of each family; as was the norm on perilous call outs such as this.

Unlike the tug, the Solomon Browne steamed in towards the stricken vessel and struggled for some time to get alongside it. The boiling sea tossed the lifeboat around, sometimes even landing her on the deck of the Union Star. In the darkness and chaos of the enormous swell four people eventually managed to clamber aboard, however it was the lifeboat men’s selfless return to rescue the remaining four that proved fatal. It was at exactly this moment that radio contact with the Penlee Lifeboat was lost, and one can only surmise what happened next. All hands were lost, and only four bodies eventually found. The same was true of the Union Star.

This loss of life hit Mousehole very hard as, in one fell swoop, a large chunk of its men was wiped out. Local fundraising accrued a staggering £3 million for the families of those lost at sea, but this could not fill the gap left by the disaster. Every year, on the anniversary of this tragic day, the famous Mousehole Christmas Lights are switched off for an hour as the village remembers their men. Although empty, as the modern replacement lifeboat is now stationed at Newlyn, its coxswain the son of one of those lost in 1981, the lifeboat house at Penlee Point stands as a memorial to its brave crew. Furthermore, 2006 saw the making of a poignant television documentary recounting the fateful day and entitled The Cruel Sea: The Penlee Disaster.

The lost crew of the Solomon Browne: 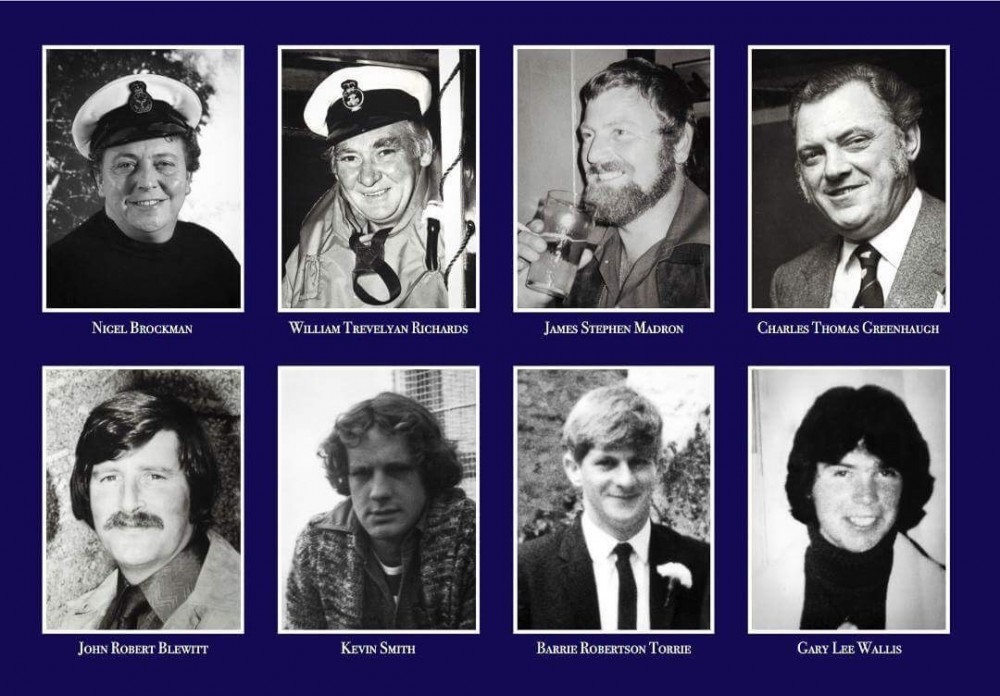 The memorial to the crew of the Solomon Browne lifeboat can be found in the north east corner of Paul church.

The Bishop of Truro, Rt. Rev. Peter Mumford, dedicated the memorial to the Penlee Lifeboatmen at Paul Parish Church on Sunday 24 April 1983. With him is the Vicar, the Rev. Geoffrey Harper and Canon Hugh Cadman who was Vicar of Paul at the time of the tragedy. 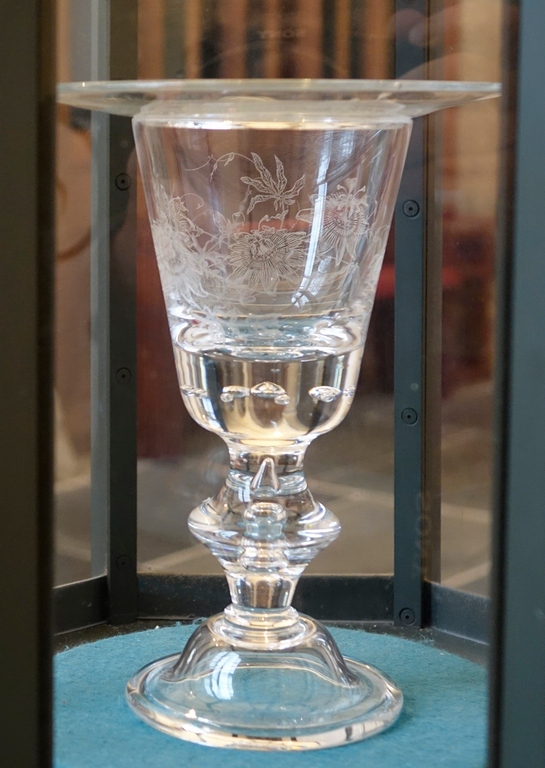