The members of the Honley & Brockholes Branch are sad to record the passing of Alan Dixon who was the RNLI Area Organiser (Manager) for the North East Area and Yorkshire during the 1970’s and 80’s It was Alan who instigated the conversion of the Honley Ladies Guild, into the Honley & Brockholes Branch, thereby enabling humble males the facility to participate .
During his time, Alan formed a great number of Branches throughout his operational area and thereby recruited a large number of dedicated and long serving Lifeboat supporters.

In 1979, Alan persuaded Cllr Donald White Mayor of Kirklees to choose the RNLI as the Mayors Charity and jointly within the year raised sufficient funds to provide a new Atlantic Class lifeboat, which was stationed at Newbiggin in Northumberland. Not only was this a massive achievement at the time but Huddersfield continued the link and provided funding for operational costs and maintenance for many years after.
The vessel which had the number B-553 was built by the RNLI in 1981, after funds were raised by the Kirklees Lifeboat Appeal for the RNLI the vessel B-553 She arrived on station on February 11th, 1982 and would be named later that year.

On Saturday July 3rd ,1982 the Atlantic 21 class Lifeboat ‘Kirklees’ was named at Newbiggin. Before a gathering of about 500 people Donald White from Kirklees Metropolitan Area named the new Lifeboat. (Photo below of naming ceremony) She was funded through generous support of the residents of the Kirklees area and among the guests many were from that locality. It stayed on service at Newbiggin until 1998. During this time ‘KIRKLEES’ launched 112 times, saving 75 lives. 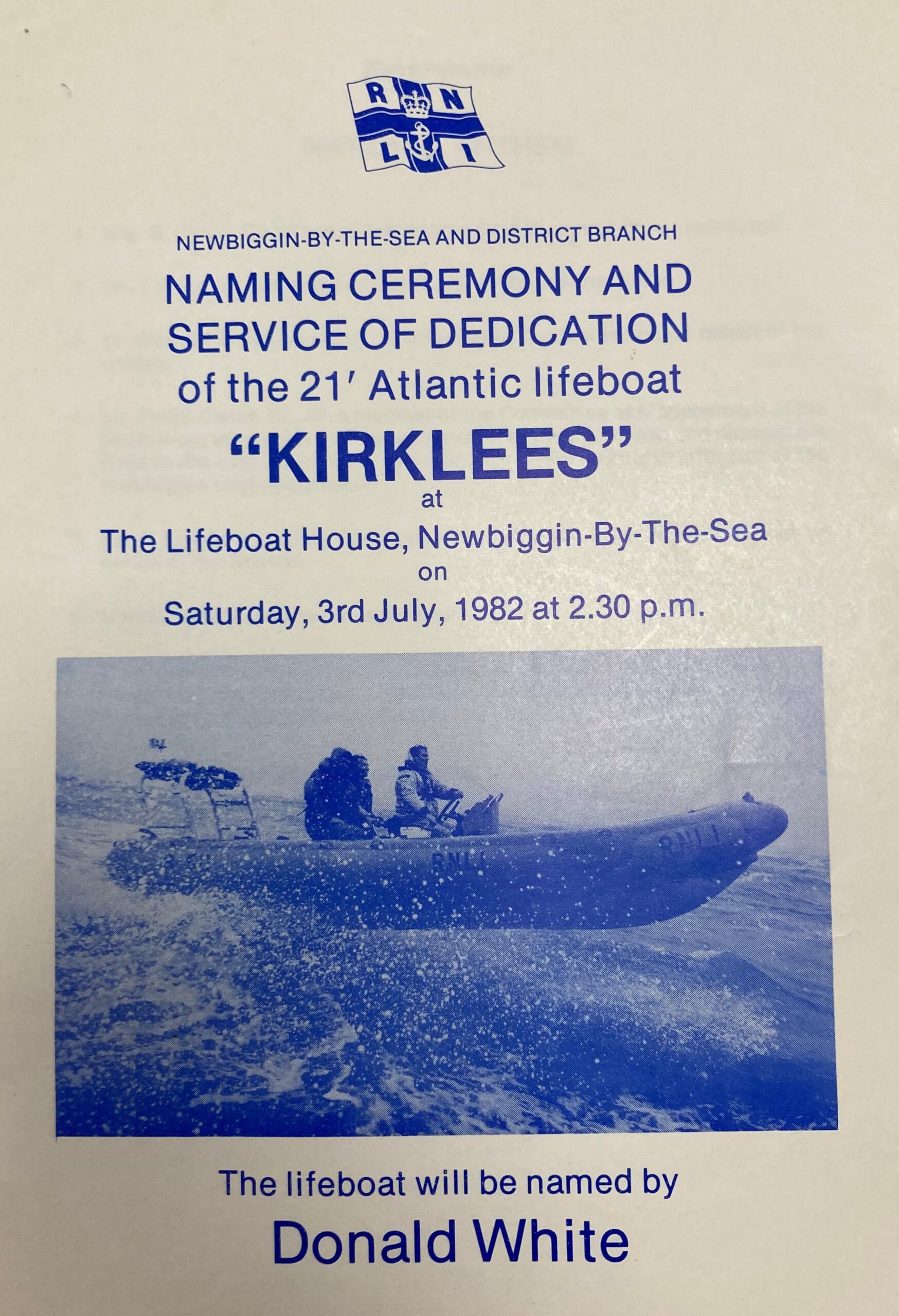 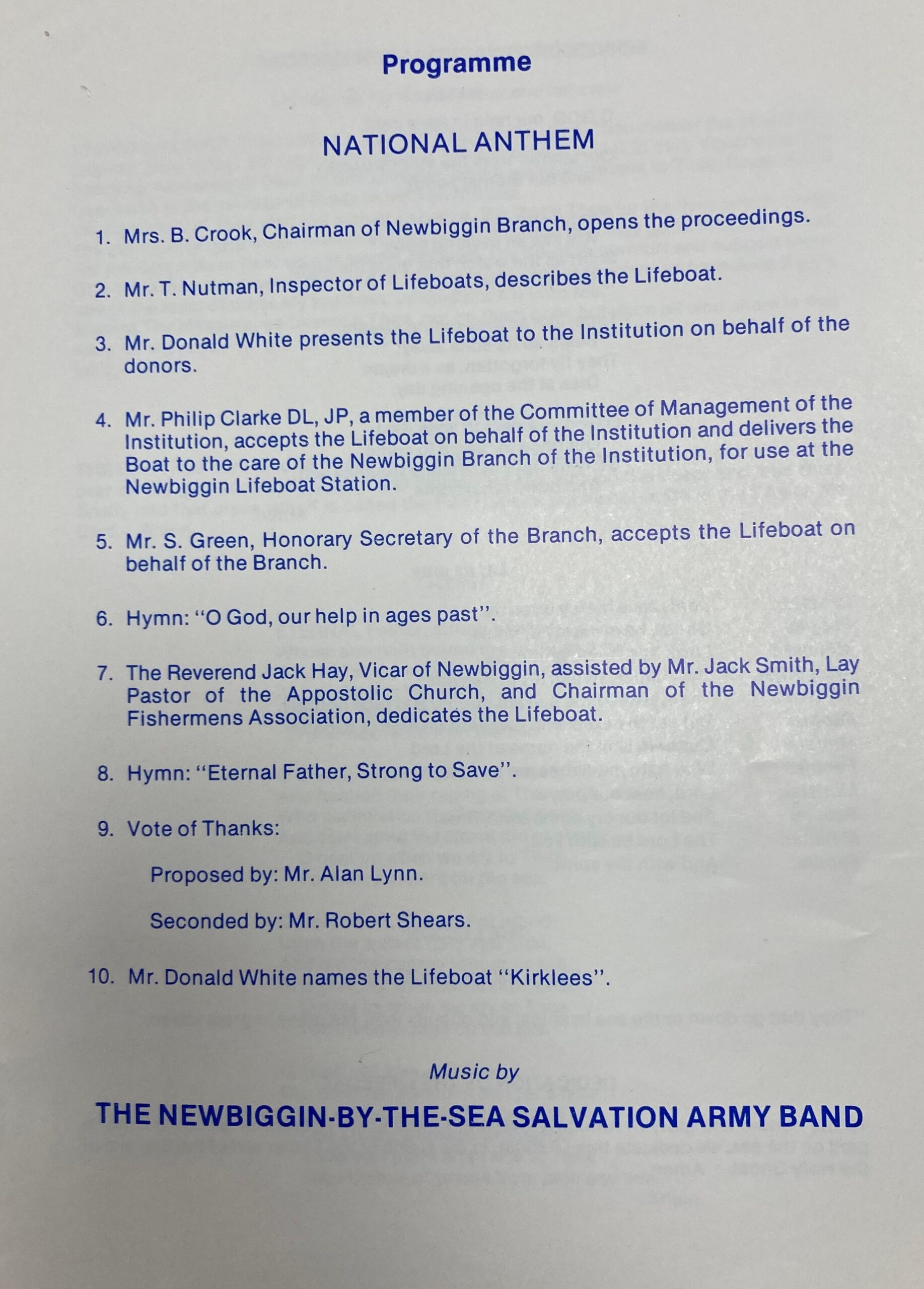 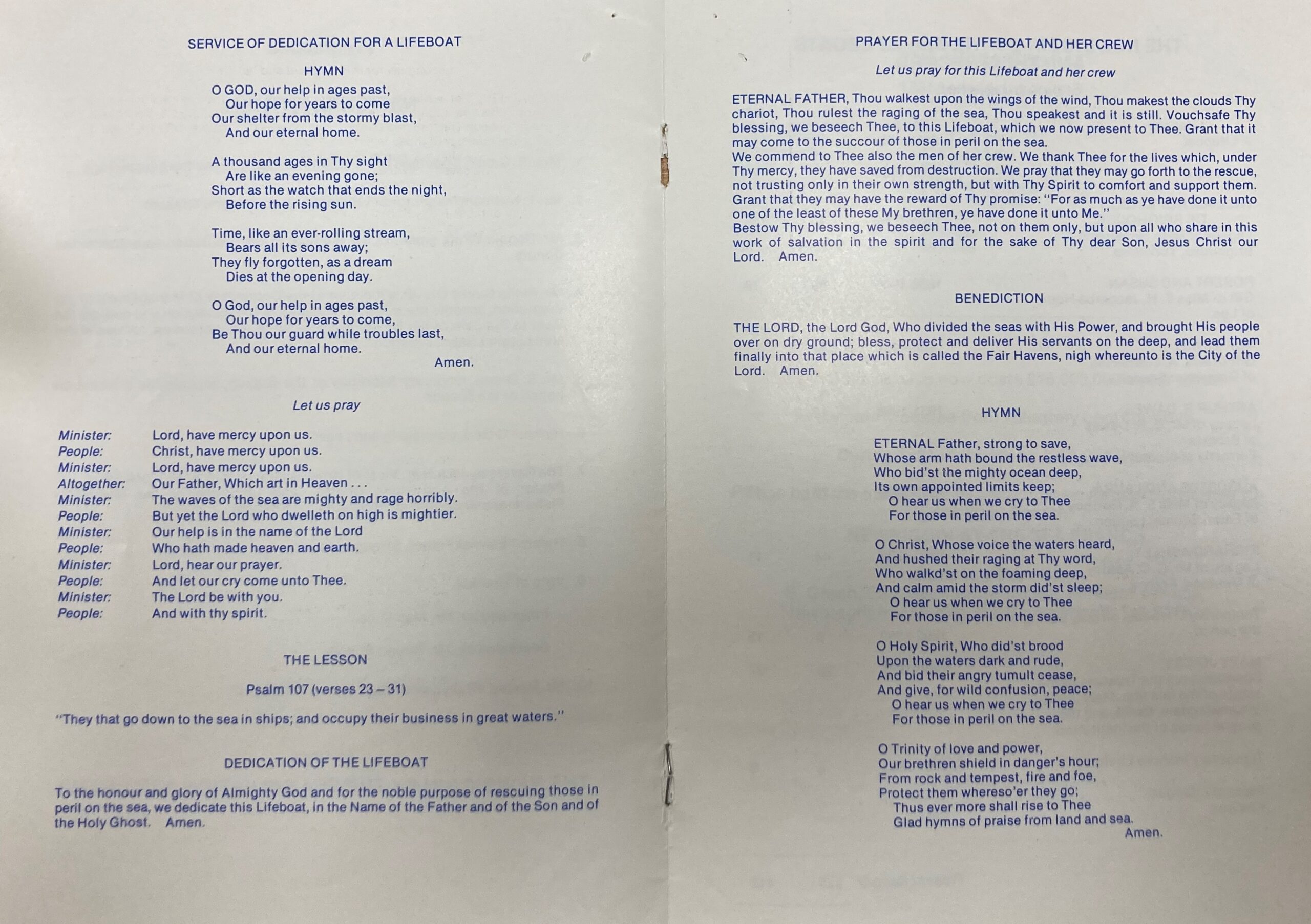 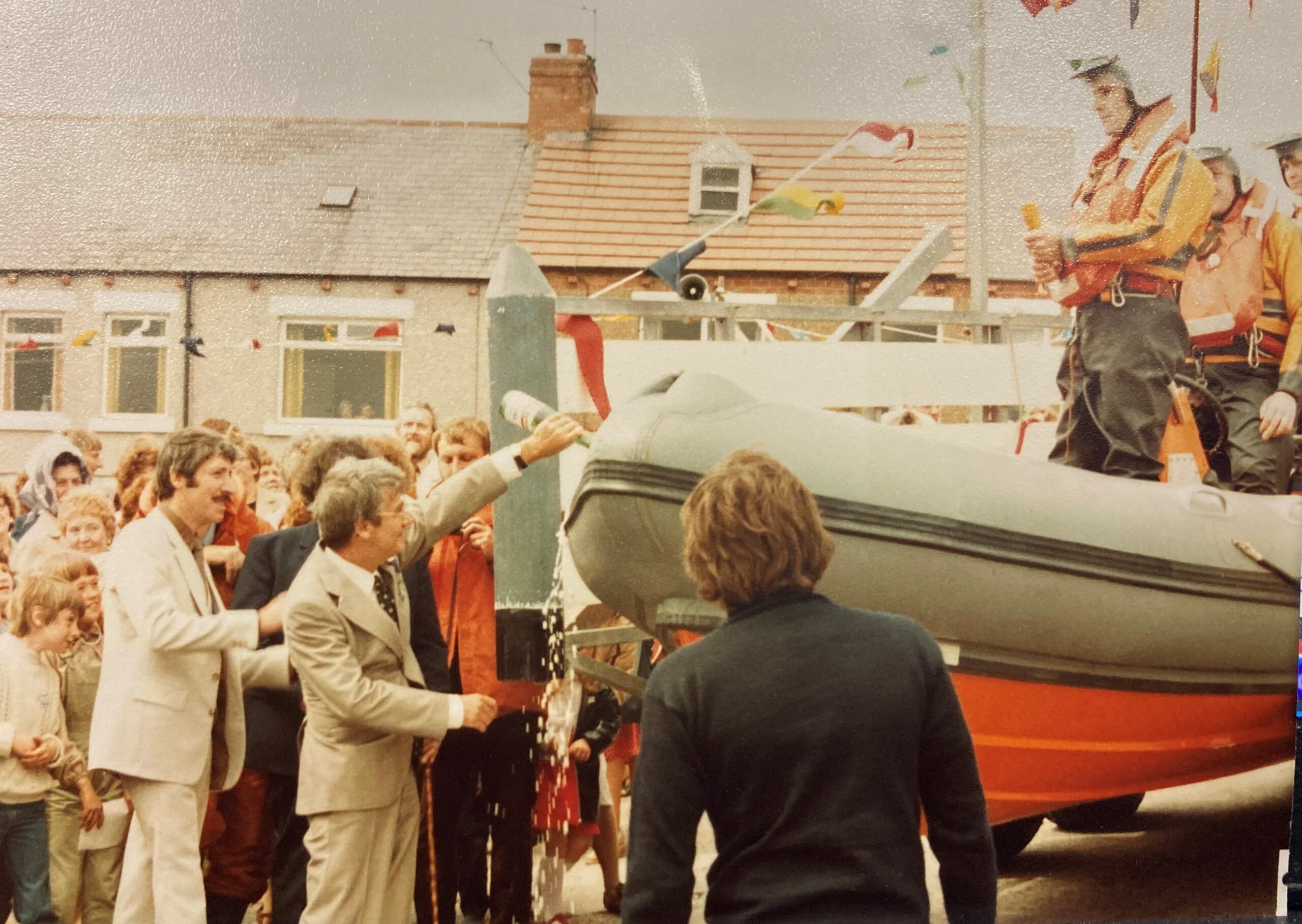 In 1998, the vessel was re-stationed, to make way for the then new, RNLI Atlantic 75 (B-745),B-553 then moved to Ireland, Helvick Head RNLI station for a year. In 1999 ‘KIRKLEES’ went into the RNLI relief fleet, where she was taken to stations whose vessels were due for a refit. Late 1999, early 2000, the RNLI sold B-553 ‘KIRKLEES’ to an Independent Lifeboat Station on the Isle of Wight. Sandown & Shanklin Inshore Lifeboat launched the Atlantic 21 Inshore Lifeboat into service in 2000. The boat served them well for another 11 years. 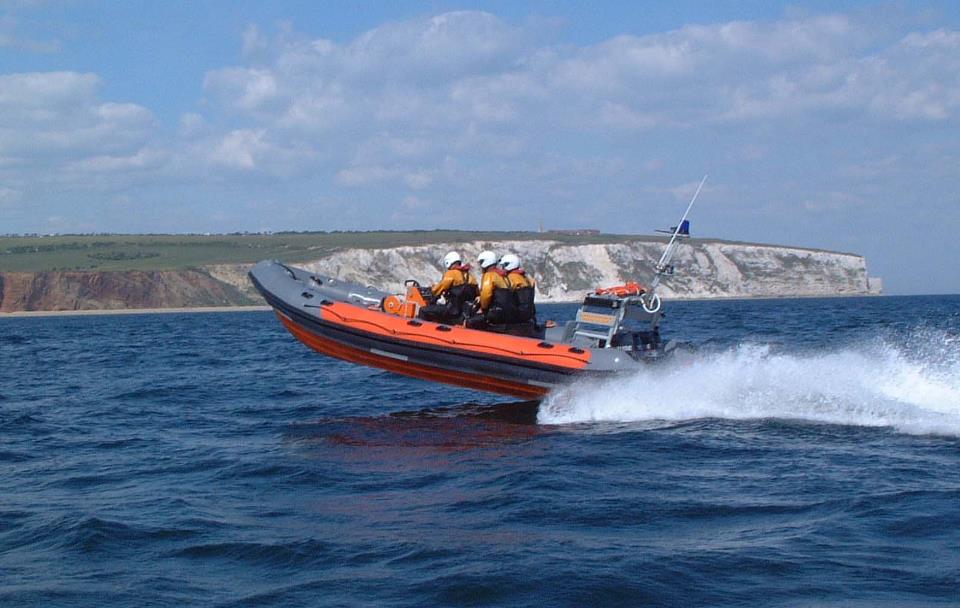 After its time on the Isle of Wight the boat was sold to another private Search & Rescue. Lagan Search & Rescue in Belfast where it is the oldest Atlantic 21 operational lifeboat in the UK or Ireland.

No matter what support a Branch needed, Alan ensured that it was available, be it operational crewmembers from the coast, display boats, personal support and expertise or whatever.
For the majority of his working life Alan was involved with the emergency services from his early days in the ambulance service, later working in the control room of the ambulance service and more recently in cctv,
Alan brought all the services together when he organised the first day long meeting for the then named “Stormforce Members” at Shelley High School. Along with the Honley & Brockholes Branch, he had the Holme Valley Mountain Rescue Team, Fire, Police, Ambulance, A Coastguard van and a Coastguard Rescue Helicopter and to splash the salt water about Coxswain Peter Race MBE from Teesmouth Lifeboat Station was also in attendance,

Whilst it is now more than 20 years since Alan moved on he is still remembered for his energy, consideration and support to RNLI supporters no matter who they were or where they came from.
A Gentleman of the 1st Order!!

Heroic rescues, medals for gallantry, and women launchers. These are just a small part of a rich heritage of life-saving at @NewbigginRNLI who are celebrating being 167 years old this year. pic.twitter.com/P4FkRriBvy