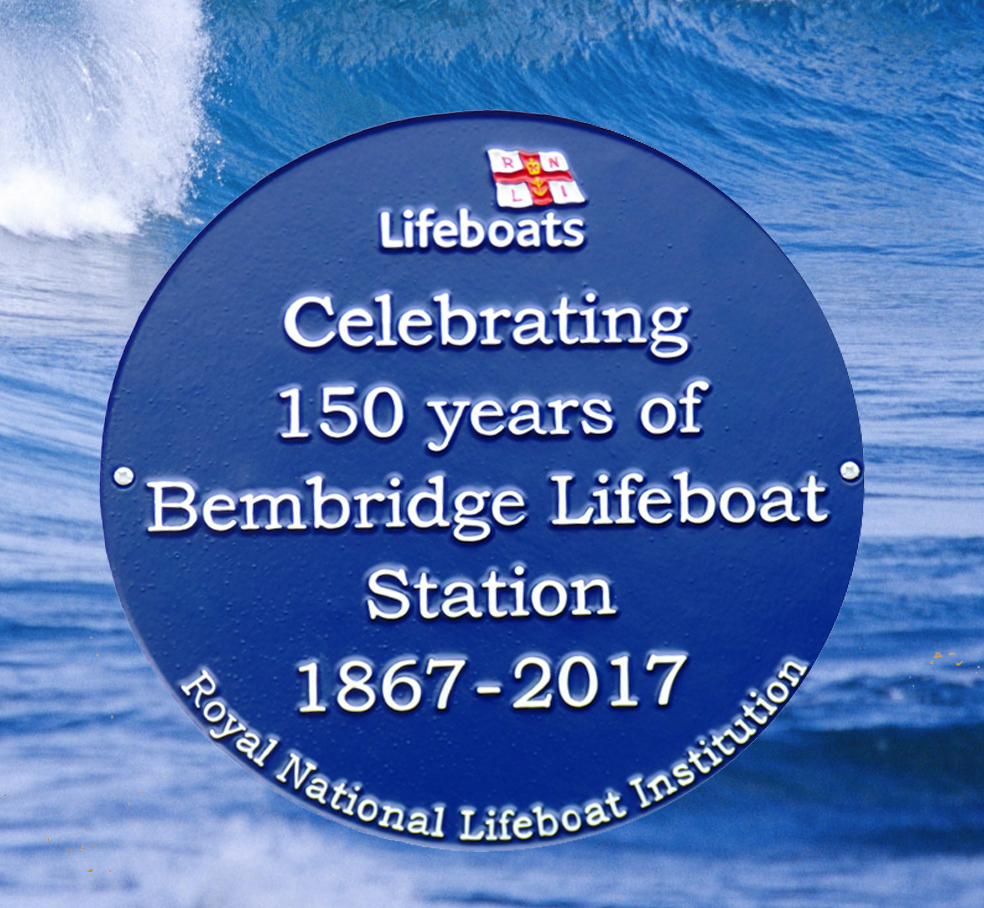 A service of thanksgiving, conducted by the Reverend Dr Amanda Bloor (Honourary Chaplain to Bembridge RNLI), was held in the vicinity of the inshore boathouse at midday for the volunteer lifeboat crew members, the fundraising guild and their families, representatives of the RNLI’s headquarters, the local community, past members of the crew and relatives of a number of past Coxswains.

The Lord Lieutenant and President of the Isle of Wight Lifeboat Board, Major General Martin White CB CBE JP, unveiled a commemorative plaque, and Michael Sturrock, trustee of the RNLI, presented the 150-year Thanks of the Institution on Vellum to the lifeboat station.

Coxswain of Bembridge RNLI lifeboat since 2003, Steve Simmonds, was also presented with a Thanks of the Institution on Vellum for his 30 years of service to the RNLI, by Michael Sturrock.

After some light refreshments kindly sponsored by the John Lewis Partnership Sailing Club and supplemented by cakes and other goodies made by members of the guild, Bembridge RNLI lifeboats, the Tamar Alfred Albert Williams, and inshore lifeboat, Norman Harvey, carried out a series of “sail pasts” together with lifeboats from flanking stations Yarmouth, Selsey, Portsmouth and Hayling Island.

The first lifeboat service at Bembridge began in 1867. A boathouse was built at Lane End at a cost of £165 and the new lifeboat was launched by means of a carriage, drawn and handled by manpower alone. She was a “self-righting pulling boat” 32 feet (9.75m) in length and 7 feet 6 inches (2.29m) in beam. She was paid for with funds raised by the citizens of Worcester and was therefore named City of Worcester. The boathouse was enlarged between 1902 and 1903 and was in use until 1922. Since 1964 it has been used to house the inshore lifeboats.

The second and third lifeboats at Bembridge (1887 and 1902 respectively) were both named Queen Victoria; they were faster and better equipped than the City of Worcester, having sails as well as oars. The earlier of the two Queen Victorias survives today and was present at the ceremony with kind cooperation of the Isle of Wight Historic Lifeboat Trust.

By 1922 the RNLI realised that given Bembridge’s location, the station required a motor lifeboat to replace the old pulling and sailing lifeboat. This change required the construction of a new boathouse . To launch the motor lifeboat the RNLI built a concrete pier almost 200 yards in length from the shore to the outer ridge of rocks that form Bembridge Ledge. At the seaward end of the pier, a covered platform was constructed on concrete piles, with a concrete, timber and steel launching slipway, extending into the deep water outside the reef.

Further improvements to the boathouse were undertaken in 1939 to enlarge its capacity to accommodate a new Watson Class twin screw motor lifeboat, the Jesse Lumb. She was named and dedicated by the Right Rev. Lord Bishop of Salisbury, Dr. Neville Love , D.D. on 21 July 1939. The Lifeboat was funded from a legacy presented to the RNLI by a man of London and Leicester named Lumb.

Her service ended 31 years later as the longest-serving lifeboat at Bembridge. For the next 40 years she was on display at the Imperial War Museum at Duxford, Cambridgeshire, but in 2016 returned to Cowes in the Isle of Wight.

In 1964 Bembridge became one of the first RNLI stations to be equipped with the new D-Class inflatable lifeboat, and this inshore lifeboat was housed in the old 1867 boathouse.

In 1970 the offshore boathouse was once again altered and improved to accommodate a new lifeboat – the Solent class Jack Shayler and the Lees, which served on the station from 1970 to 1987.

In 1987 the station was allocated a new Tyne class lifeboat. The offshore boathouse doorway once again had to be altered to accommodate the bigger boat. Max Aitken III was on the station until 2010. The speed of the Bembridge lifeboat leapt from 9.5 knots to a staggering 18 knots.

In 1994 further improvements were made to the station and vital major repairs made to the slipway. The old station used for the inshore boat at Lane End had work carried out in the roof space for improved crew facilities.

In 2009 the RNLI decided a new Tamar class lifeboat was to be placed at Bembridge. This required the demolition of the original offshore boathouse and walkway. The Bembridge station launched an appeal to the public with the aim of raising £1M towards the projected £10M required for the project.

Demolition began in May 2009; the Tyne class lifeboat Max Aitken III was retired to the RNLI’s relief gleet and the station was allocated a Mersey class Peggy & Alex Caird from the relief fleet while the new station was being built. The Peggy & Alex Caird was stationed just outside the harbour on Bembridge Point and was launched across the beach by a semi-submersible fully-tracked tractor. She served the Bembridge station for just over 18 months.

The design brief for the new station was to achieve a facility which would allow the lifeboat to reach 90% of all casualties within 30 minutes of launching, at virtually any point within 10 miles of Bembridge – and in any weather.

The new boathouse and 174m (190 yards) walkway were completed by October 2010 at a cost of £7.65M and the new £2.8M Tamar class lifeboat was deployed to the rebuilt station; Alfred Albert Williams became operational on 10 October 2010. The Tamar’s impressive 25 knot speed is part of the RNLI’s plan for an entire fleet of 25 knot all-weather lifeboats (ALBs) by 2019. The Tamar’s range and endurance at full speed are 250nm and 10 hours. She was named by HRH the Princess Royal on 10 August 2011.

The work carried out on the inshore station required that parts of the historic boathouse, which dates back to the nineteenth century, had to retained. These older sections of the boathouse were carefully preserved whilst the new building was gradually erected around them. The new inshore lifeboat hall currently houses the D-class inshore lifeboat Norman Harvey, gifted and named by Mrs Joan Harvey of the Seaview, St Helens and Brading Haven RNLI Branch in memory of her husband. Within the new building, changing rooms for the inshore lifeboat crew, a crew training room, an office and a new souvenir shop were installed. This work brought the overall cost of the station upgrade to approximately £11M.