Our 90th Year of Fundraising!

From the Depths of the archives……

Over 90 years ago, on the 22nd June 1927, the Honley Ladies Lifeboat Guild was formed at Honley House; by Mrs. Dorothy Ripon. (the wife of a very respected businessman and entrepreneur).It was at this first meeting the Guild recognized the important services of the Royal National Lifeboat Institution (RNLI) in its national work of Lifesaving and they desire to record its hearty appreciation of the gallantry of the coxswains and crews of the institutions lifeboats and resolved to constitute a Honley Ladies Lifeboat Guild.

It was also, at this first meeting that Mrs. Ripon was elected as President and Mrs. Thornton and Mrs. Oldham were Vice-Presidents. Mrs. Martin was elected Honorary Treasurer and Mrs. Garside Honorary Secretary. Badges, certificates and collecting cards were distributed at this first meeting on the 22nd June.  Each member of the Guild headed her own collecting card with a personal donation of 2/6d (at least half a crown) with the intention of obtaining as many other donations as possible. Each committee member had their own area to carry out their house to house collections. Regular committee meetings were held, where funds raised from House to House collections were discussed. Other fundraising ideas were also discussed but hardly came to fruition as house to house collections seemed most profitable and easier for all concerned, has donations seemed to increase year after year.  Each year, after the guilds accounts were audited a copy of the balance sheet was placed in local newspapers (Examiner and Holmfirth Express) and shop windows. 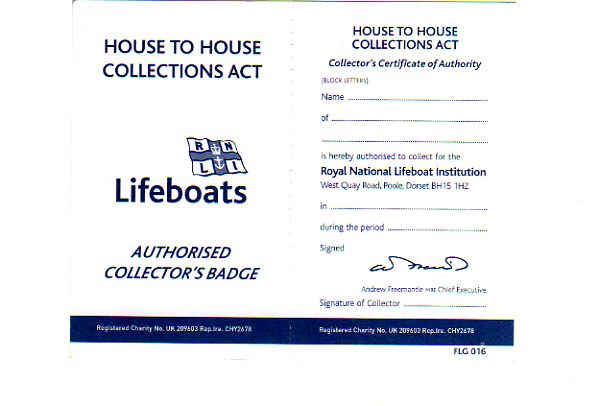 After each and every committee meeting,
records show that Mrs. Ripon served tea for all. 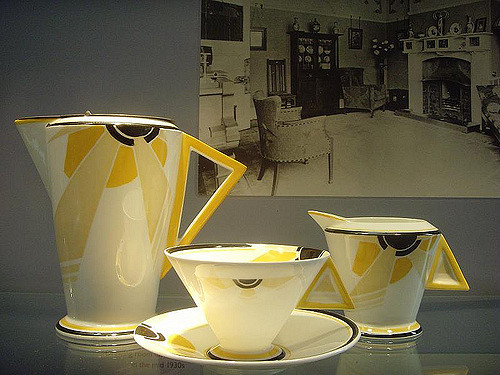 The Honley Ladies Lifeboat Guild was one of the very first to have house to house collections to be held in the British Isles, this first collection raised £22-11s-6d (£22. 57p), as records show it seemed that this was the main fundraising within the guild and was quite profitable for the Institution.  With the development of new houses being built in 1938, a committee member suggested all collectors have more envelopes to distribute before the next collection date, sadly the envelopes didn’t arrive in time for the meeting and the secretary ended up delivering them personally to each house.

1940 brought a usually satisfactory house to house collection balance of £40, this was very surprising due to the fact that there were more charities collecting at this time, to support the war effort. It was feared that collections may have been dropped because of the war, so these results were particularly gratifying.

All members/collectors of the Lifeboat Guild now had to wear badges and carry their certificates when collecting which were provided by headquarters, as well as sealed collecting boxes.

“We were unable to get the envelopes for the collection owing to them having been bombed!”

was a statement I read whilst researching information for this document.  It just goes to show that even back then in 1941 and up to modern day, that our hearts go out to help those in difficulty at sea, and nothing shall stand in our way, not even a bomb!

1948, Mrs. Ripon hosted a social evening at Honley House on 20th July to celebrate the 21st Anniversary of the Honley Ladies Lifeboat Guild. The following year Mrs. Ripon was presented with a Statuette in recognition for all her hard work, support and true dedication over the years.  In October 1951 saw the Honley Ladies Lifeboat Guild hold a mannequin parade with ticket sales amounting to £11-5s-0d, and then a film show was held in 1957 to commemorate 30 years of fundraising.

Mrs. Ripon for personal reasons couldn’t host the meetings at  Honley house anymore, so the Honley Ladies lifeboat Guild had to move for their committee meetings to the Parish room, this was agreed by the vicar and the Parish Council. The next meeting was held on 16th July 1939. Mrs. Ripon was a founder member and remained president from 1927 to 1970.

In 1965 it was proposed by Mrs.Mason and seconded by Mrs. Ripon that Mrs. Christopher England (Mrs. Judy England is now our Vice- President  and has been a member of our Guild/Branch over 50 years) was asked to join the committee.

It was at a meeting held in the parish rooms that after great discussions it was proposed by Mrs. Butterworth
and seconded by Mrs Lumner that the ladies Guild was now to be known as Honley & Brockholes Ladies Lifeboat Guild, on 2nd October 1974.

Mrs. Yvonne Ingham has been another of our valued members of our branch since the early 1980’s, having carried out many roles including that of souvenir secretary and has held the post of Honorary Treasurer since 21st April 1998 . Mrs. M. Wood joined in the early nineties and had positions as Chairman and President until retiring 2013.

Mr.Graham Hirst became President after being elected, in the same year.

It wasn’t until the formation from a guild into a branch on 12th March 1986, that gentleman were allowed to become active members, to open new channels of fund raising in the area and to further increase the tremendous efforts already carried out by the lady members over the years.  It was at this meeting that Mr. Maurice Littlewood now our chairman and Mr. Andrew Ingham now our box secretary were elected on to the committee.

Many people as well as branch members have given their time, donations, boat pulls and other various events, legacies, flower demonstrations by Brian Battye,  etc, over the last 90 years, however due to the records not containing individual details of all these, I can only write about what I have as you can appreciate, so please accept my apologies if I haven’t written about friends relatives that you know have donated, but please accept my personal thanks. here’s a report I think you may find interesting:

‘Jim Rescues Rubbish to Save Lives!’

Jim Pearson of Honley Car parts, in West Yorkshire, spotted an adjacent carpet firm dumping hundreds of carpet squares into a skip.  Quick thinking Jim asked if he could have them, and retrieved the doomed items along with a large pile of similar samples.  He transferred the ‘pile’ into his cellar and began to sort them into matching sets of colour and size.  he then displayed a notice in his shop “Quality car mats 25p – All proceeds to the lifeboats.” From then on Jim had a steady trade, his neighbor regularly replenishes his stock in 1991 he had raised over £242 for the lifeboats, it was nearly his full time job emptying the collection box.  All this from a man who was not a even a branch member in a small village, about as far from the sea as you can get!. 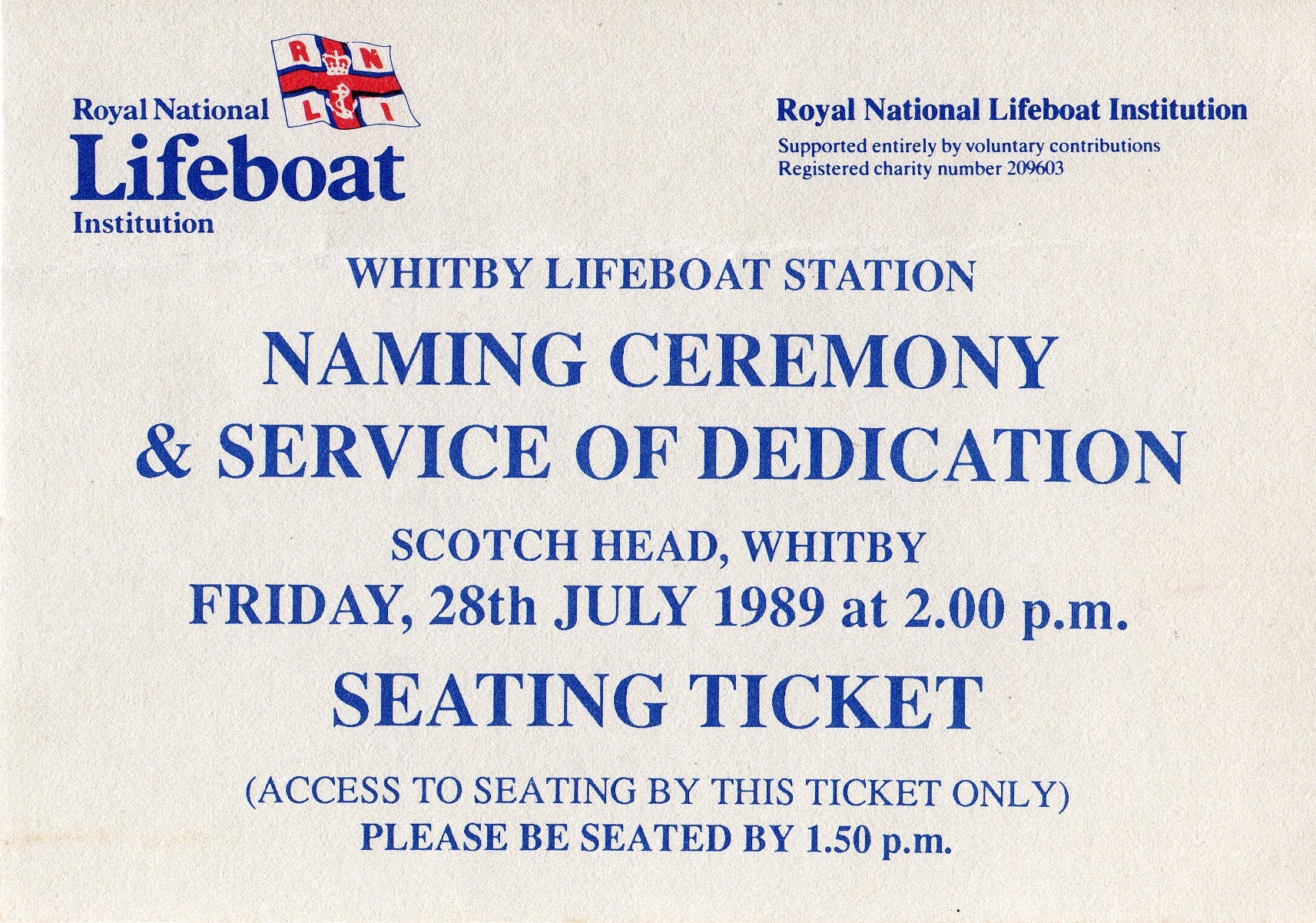 To celebrate our 80th Anniversary, Mrs. Margaret Wood contacted the local flower club to inquire whether they could undertake a floral design to celebrate the momentous occasion. Miss Dawn Mills was asked to undertake the role with a title ‘Eternal Father Strong To Save’.  The design (a cascade depicting a waterfall) was part of a flower festival titled ‘Let all the world in every corner sing’ from 29th June- 1st July 2007, held at The Parish Church of St. Mary, Honley.  It was through this flower festival and our branch of the  R.N.L.I. that two of our past committee met, fell head over heels in love and married the following year at Gretna Green – December 2008.

Mr. Roy Meakin, has been advertising our branch events etc. in all our local newspapers and free magazines for many years (since June 1998 till April 2019), as he was the Press secretary and Vice-chairman. Mrs. Dawn T. Meakin joined our branch committee first as the webmaster taking over from Tony Watson in 2016 and was our branch Honorary Secretary (elected May 2017 till April 2019). 2017 saw two new committee branch members elected and taking over the role of Souvenir secretaries as Mrs. Anne and Mr. John. Mills.

Since the formation of The Honley & Brockholes R.N.L.I. Fundraising Branch we have raised hundreds of
thousands which is all attributable to the saving of a great many lives at sea. Unfortunately, from 2017, after serious thought and deliberation, The R.N.L.I. stopped house to house collections, even though they were so profitable for our branch, so as not to be cold calling or upsetting vulnerable people. 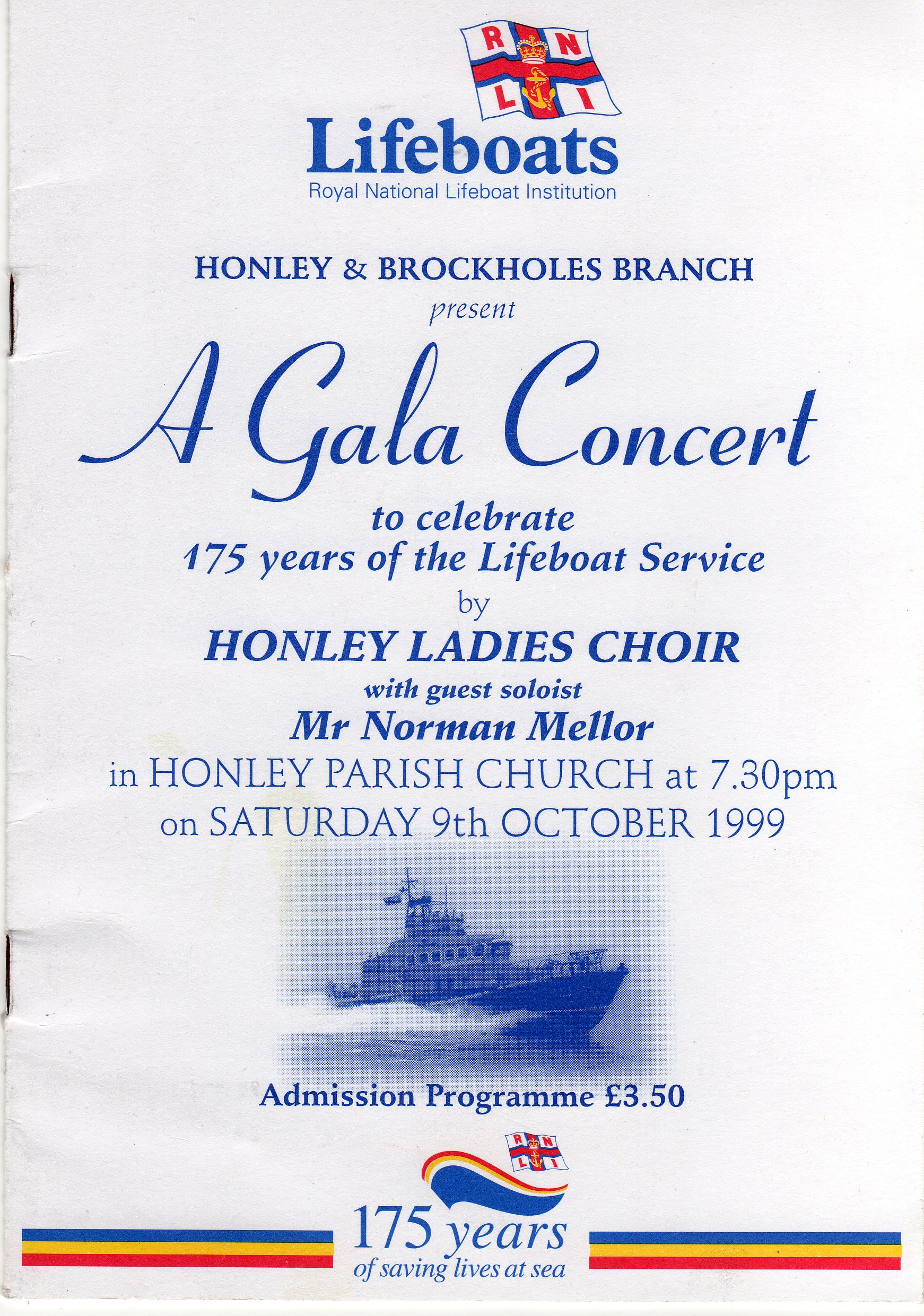 We hold our meetings in the heart of Honley at The Liberal Club, Cuckoo Lane, HD9 6AS (please check website for next date), we have held our meetings there since 3 March 1988. Honley and Brockholes RNLI Fundraising Branch is one of the oldest branches in the area and is now celebrating over 90 years of fundraising.

May we take this opportunity to thank each and every one of you, who has been a part of this guild or branch for all your hard work and all those who have supported over the past 90 years, to help making the branch as successful as it is today, on behalf of the current committee.  I hope you all understand I have only been a member for a short time and are working with very limited resources, if anyone has any other snip/bits or interesting facts to add to this citation, an email address can be found at the bottom of this citation.

We welcome new members to the branch and anyone who can help at our events even for one hour, please visit  our main website for more information.

The RNLI was founded in 1824 as the National Institution for the preservation of Life from Shipwreck and today provides the 24 hrs. on call search and rescue service out to 100 nautical miles from the coast of the United Kingdom.

The Honley Ladies Lifeboat Guild was formed in 1927 for the purpose of supporting the brave and selfless lifeboat crew who saved life at sea.

If you have more information please contact us at rnliweb@gmail.com